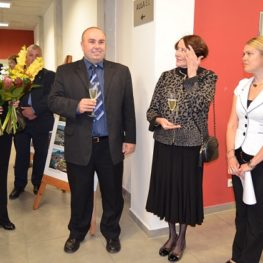 ITB was the place where the people form south Bohemia reminded the 20th anniversary of the first free elections in the Republic of South Africa.

“The republic of South Africa is located on the different continent, but it is interesting to compare its experience on conversion from racial segregation to democracy and the fall of totality in former Czechoslovakia a quarter of century ago. Both of these anniversaries from different countries are very similar,” said Marek Vochozka, the rector of ITB

After formal fall of apartheid in 1994 free elections and the development of democracy started in the Republic of South Africa and this country has had the most progressive and most liberal constitution on the world.

About 1500 guests participated on the social evening and the evening was started by Franky Verwey, the ambassador of the Republic of South Africa in the Czech Republic. She expressed her thanks to the school, which provided this occasion on its academic ground. She also reminded the non-violent change into democracy and the first president Nelson Mandela who was able to keep peace in a very difficult situation. His period of presidency is the main motive of the movie Invictus, which won Oscar. The movie was directed by Clint Eastwood and Mandela was performed by Morgan Freeman. The story is about Mandela and his efforts to join together the nation which is economically and racially divided. It was possible to see this movie and also there was an exhibition of photos from the period of Mandela’s times.

The academic environment was proper because it is the proper ambient, included ITB, where are many foreign students and it gives to this kind of occasion an international and multicultural spirit.