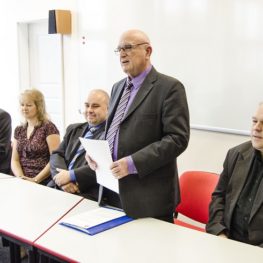 For the first time in the history of ITB the new academic year has started in two places. The academic year 2011/2015 started in the metropolis of the south Bohemia, Budweis, and in Tábor, where the Centre of technical studies of ITB with the bachelor specialization of the Progressive materials in the automobile industry has been founded. It is a part of the engineering field of studies, and several tens of students have started their studies there.

The interest of studying at ITB has overreached its capacity two and half times.

“We enrolled 1300 new students. More was not possible. I‘m very pleased by the fact the interest of our technical fields of studies is so enormous. I believe we will push up the quality of our education thanks to these new talents,” says the rector Marek Vochozka

The ingression into Tábor represents the breaking moment. ITB is regionally and professionally aimed school it develops and strengthen its position in the south Bohemia region. “The region of Tábor with its advanced industry is the long-time investment. This investment should result into the strong academic ground, attractive to students and local companies,” said the rector.

The centre was founded in the area of the high technical school in Tábor where was the right ambient with modern laboratories and work-rooms. The representatives of the city, employment office and some local companies were present during the opening of the new academic year.

ITB is the youngest public university in the Czech Republic. It was founded on 2006 and has 4000 students in five technical and economical bachelor fields of studies. Logistics technologies, the new magister field of studies, has been added to the others.

The construction of the new complex of central laboratories in the ITB campus will be the highest investment of the new academic year. It will be about 40 million CZK. This investment will improve the education, the students’ preparation and the station of technical fields of studies at school. New premises will extend the opportunities of cooperation with south-bohemian companies in applied research or implementing of innovative technologies into the praxis.