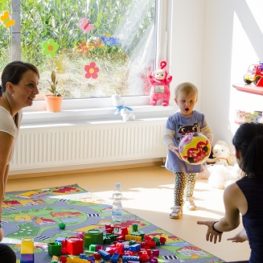 A new kindergarten of ITB was opened by festive ribbon cutting and wishing nice days. The kindergarten grown up in the area of ITB and the capacity is 24 kids.

“The new kindergarten really helped us so much, because it was impossible to get a free place for our son in any kindergarten.  Now my wife can go back to her work,” says Václav Karas, the expert officer of the ITB library.

But nursery is not only for the ITB staff’s kids, but it is also for general public.

“The opening of the ITB kindergarten was one of good news of this summer. I am going to get a job after my maternity leave in March and I did not manage to place my children into any other public nursery,” says Eva Havlicová, the mother of twins.

The kindergarten opening was announced a few days ago and the capacity is slowly getting fulfilled. But a few free places still remain.

To build the nursery cost 4, 6 million CZK. Thanks to the chosen system of eight modules, the process of building was very fast. The carcass took one day and the completion took three months. The one floor project with the area of 190m2 consists of an air-conditioned game room, dressing room, food server room, staff room and technical room.

The module buildings belong to the most interesting constructing trends of the present days. They are fast and give a freedom to investors. And it also spare up to one third of costs,” says Igor Zahradníček, COE of Touax company which build the kindergarten as a turn-key project.

The ITB kindergarten starts its running on 1st September and the opening time is going to be from 7 AM to 17PM. The monthly charge is going to be 2 000 CZK. More info at www.skolkavste.cz